Located in the centre of Taiwan, Taichung has few sights or attractions, and I don’t recommend that visitors to Taiwan spend more than an afternoon in the city, mostly for a couple of good meals, as Taichung boasts some of the country's best vegan restaurants. Taichung is, however, considered a great place to live, for vegans and non-vegans, Taiwanese and foreigners. Compared with Taipei weather is milder and sunnier, the air is cleaner (all things being relative) and its MRT (subway) system is due to open any day now.

The Taichung vegan scene is led by Bluesomeone, who was and still is Taiwan’s most famous vegan blogger.  She has inevitably needed to turn down her blogging now that she and her engineer-gone-chef run a busy café and a new restaurant, and she now writes little in English, but here is her blog (Chinese only) and her Facebook Page, with some English.

I am working on a Taichung chapter for my travel guide to Taiwan for vegans, but am posting this in the meantime, for readers of my books or (as always) for anyone looking for information on vegan food in Taiwan.

Bluesomeone’s new restaurant serves far more creative food, and while it’s just opened, from my visit as a customer and when I recently attended her opening party, I can say that she seems certain to serve some of the best Western and fusion food in Taiwan. If you have time when you pass through Taichung, I highly recommend a visit. It also has a small bench along a wall where customers can do PC work.

Happy Mom Kitchen is the go-to restaurant among resident vegans for a delicious, healthy, inexpensive meal in Taichung, and it's quickly become one of my favourites. If your Mom was happy, vegan and Taiwanese, and a very good chef, then you'd probably be lucky enough to eat this food every day.
A gentle word of warning: in Taiwan expectations for burgers are quite different to those in the West, and these burgers are very Taiwanese in style. Westerners might be more likely to enjoy the rice dishes (especially the Ma Po Tofu shown above) and side dishes more than the burgers. The fried dumplings (which are similar to and as good as gyoza from Japan) immediately above are another one of my favourites here.

This later addition to the scene started with one passionate Taiwanese vegan chef who was determined to promote veganism through food. Trained in Italy, he's also passionate about whole food, and it shows. While this restaurant had everything against it, especially its location, on my last visit I took the last seat at the bar, while all the many tables were full. Compared with Veg Farm and Bluesomeone's restaurants, food here feels more home-style, like a talented chef whipped up your meal in his kitchen. Because that's basically what happens. There is also a more-limited menu, with a more extensive dinner than lunch menu, but easily enough to choose from for several visits.
I recommend trying the pasta, since it's the chef's specialty.

This restaurant is a little difficult to get to, but I want to include it because there's many reasons to make the special effort to go there. First, its owners are passionate about promoting veganism, and also about providing international cuisine in Taiwan. I consider its menu on par with Veg Farm for the offering the most authentic Western food in all of Taiwan.

The specialty of Le Jardin is pastry. It serves the best Western-style pastry dishes I have ever eaten in Taiwan (see below). On my visit the chef was experimenting with Indian food, and made a delicious samosa, complete with a unique loquat chutney. 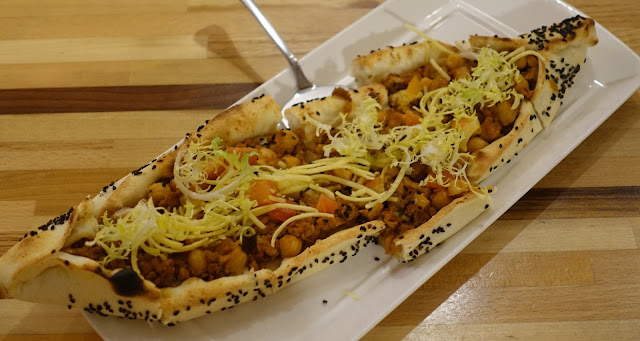 While it's quite a long way from the city centre, if you are going to Taichung by train it's worth staying on for two more stops to Taiyuan Station, from which it's a short bus or taxi ride to Le Jardin. Please note that Taiyuan Station is not on the Tze-Chiang (express) trains, so if coming from the north it's best to change to a local train at Fengyuan, or continue to Taichung Station and then go back to stops north on the local train.

When Veg Farm opened a few years ago it served what I an other vegans considered  to be some of the best international cuisine, including burgers and Mexican dishes. I especially appreciated their baked apples - a taste from my childhood I'd never seen in Taiwan before.
The owners of Veg Farm have opened two new vegan restaurants in Taipei (including Baganhood), and are major importers of vegan cheese ad other plant-based alternatives to animal foods. In my understanding, as of early 2021, the Taichung restaurant (Veg Farm) has been somewhat neglected after the focus of the business has moved to Taipei. If you have a positive experience please feel free to let me know (see the About Me section), but, until I hear otherwise, I don't recommend it to others, especially when there are such better vegan alternatives in Taichung. The most similar food and dining experience can be had at Le Jardin du Petit Prince (see immediately above).

Other Restaurants Not Listed Here

The restaurants listed here are so far the only ones I am confident are 100% vegan. There are several other restaurants which are listed as vegan on Happycow because either the owners or customers believe that they are, but they may well be “vegan restaurants which aren’t”, that is restaurants run by vegetarians (or non-vegetarians) which don’t serve meat or dairy, but neglect to check foods for dairy or egg ingredients, often in their sauces or fake meat. The only reviewer of Tesher Veg House (listed on Happycow as vegan, as we can’t prove otherwise) writes: “The ladies running the kitchen were also delightfully sweet even though we couldn't communicate that well with them. We did confirm that everything was vegan though!” As delightful as the ladies no doubt are, it’s unlikely that the menu at a place like this is intentionally vegan. That is not to say, however, that it’s impossible to get vegan food at others, or that we shouldn’t visit them to encourage and educate the owners in veganism. A "vegan" Thai restaurant which has recently closed in Taichung used to use fake meat from the local market, which is unlikely to be vegan and even likely to contain real meat (see my article about fake meat in Taiwan). I recommend sticking to these trusted vegan restaurants. If you know of a vegan restaurant which you think I should recommend, please let me know (find my details in the About section).