Best Vegan Restaurants in Hsinchu in 2021

Hsinchu is a small city almost unheard of outside of Taiwan, however, there is at least a 50% chance that the computer chips you are using to view this web page were manufactured here (though your computer was probably assembled in China). The Hsinchu Science park (a massive but surprisingly pleasant industrial complex) is  the powerhouse of Taiwan's economy, and as a result the average income in Hsinchu is higher than any other city in Taiwan (though due to its size Taipei still appears more affluent).

If you are a tourist or traveller in Taiwan, you probably have little reason to come to Hsinchu, except perhaps as a stop on your way south, though with such a fast and efficient train system on such a small island, even that is unlikely. If you're here, chances are it's either for a business visit to the Science Park, or you're living here, either teaching English at a local school or buxiban (cram school) or teaching another subject at an International School.

While it's no Venice or Kyoto, much work has gone into 'cleaning up' Hsinchu in recent years, including the development of a pleasant canal through the centre of the city. Hsinchu is arguably Taiwan's third most liveable city after Taipei and Taichung, though with its new MRT system, Kaohsiung could be challenging all of these.
For a while, Hsinchu had several good vegan restaurants, including two excellent vegan places in one street, walkable from the central city. Unfortunately both have closed, leaving slim pickings in Hsinchu at this time. 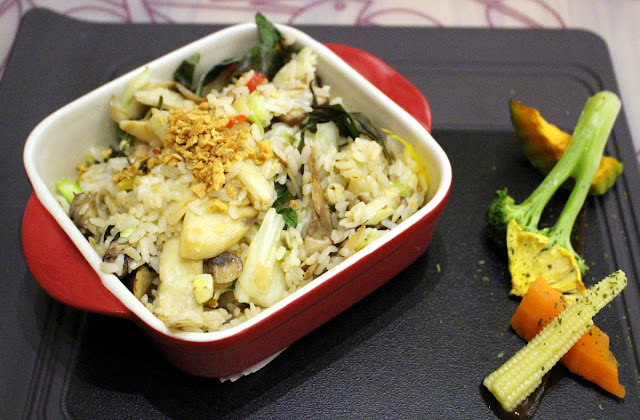 For many years Miracle Greenhouse was Hsinchu's only vegan restaurant, and one of so few in Taiwan that it attracted visitors from all over the country.  It's a little out of the way, but if you find yourself in Hsinchu and want a nice meal out -- or a business lunch -- then this is the place to come, as it has been for over a decade. Dishes start at around NT$300, with filling set meals around NT$500. They also sell a few of their organic vegetables and Loving Hut products, which are otherwise difficult to find in Hsinchu. 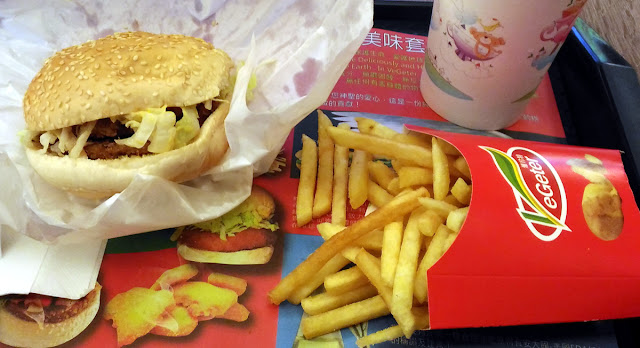 Food at this fast food restaurant looks frighteningly like it could be from somewhere that you probably haven't been - or wanted to - for years. Many non-vegans enjoy a healthier take on fast food and what they are used to, and many vegans enjoy it for the novelty value, but unfortunately the food doesn't taste much better than I imagine the food it's intended to copy does.

Messages on the walls suggest that the owners appear to be very passionate about the environmental message, so it was surprising that when it opened a couple of years ago little of the menu was vegan, however they appear to have gone completely vegan, and have also recently opened a branch in Taipei (near Songshan Cultural and Creative Park).

Price range: meal sets (a burger, fries and softdrink) cost around NT150.
If it's closed: walk to Tzung Ye or Fan Thai.


I don't often recommend non-vegetarian restaurants on this blog, but if you're at Nanliao (the old port, where the annual dragon boat races are held in June) it's worth dropping in here for a vegan pizza. A popular haunt for local expats, this tiny pizzaria is located right on the waterfront, and its walls are adorned with posters and stickers from every social movement in history, with a particular emphasis perhaps on Taiwanese independence, and a giant Tibetan flag on the roof. There are even Peta stickers, but unfortunately I don't think the message has sunken in, at least not as far as the menu goes.

The owner, A-He, understands what vegans don't eat, however on my last visit the vegan pizza on the menu was just a copy of the vegetarian (complete with cheese). Even if A He isn't there, staff all speak English, so it shouldn't a problem to communicate that you don't want cheese.

Nanliao would be a fairly long taxi ride from Hsinchu downtown, so if you don't have your own wheels then this is probably not practical to visit. It's located beside the temple (ask someone for pizza and they will tell you).

If it's closed: there's not much else around here. I suggest bringing snack food if you come to Nanliao. If you make a special trip here be sure to call first. Staff speak English as this is a popular hangout for expatriate teachers and businesspeople.

Hsinchu is the capital of fake vegan restaurants.  As far as I am aware, I have listed all vegan restaurants in Hsinchu on this page (please let me know if more arrive in the comments). Most deceptively, many sandwiches contain cheese, and I doubt that anything is vegan at Homely Vegan Burger, despite the name and sign claiming three ways (in Chinese and in Chinese) that they don't use egg or dairy products (sandwiches contain cheese). And Joyful Coffee originally claimed to be vegan; whether they ever were I don't know, but they certainly aren't now.

Are you also visiting Taipei? Please see my main index of Taipei's best vegan restaurants.
Posted by Jesse at 02:55