For most visitors to Taipei a trip up the world's second tallest building in the world's fastest elevator is essential. Whether it was actually ever the world's tallest actually depends on how you count, as the height to both the top of Willis Tower (formerly Sears Towers) in Chicago and its highest usable floor has always been greater, but Taipei 101's spire officially 'counts' whereas Willis Tower's antennas don't.

Nonetheless, the building is a remarkable feat of engineering, especially given that it’s built very near a major earthquake fault, and the views on the right day are quite impressive. These clear days don't come often, however, and it’s not worth going up if it’s cloudy. It's also incredibly crowded (mostly with Chinese tourists, for whom it's a compulsory stop on the tour-bus route) so expect a wait of at least half an hour. If you intend to go up at dusk then visit early, see how long the queues are and visit Taipei 101 in the time you have left, though the night view isn't bad either. Many people complain about being herded through crystal and gem shops, and while there's no pressure to buy any, with the crowds it can be a little overwhelming.

If this all sounds like too much, and you'd prefer to trade the souvenir shops with trees and the tourists with students and professional photographers, a comparable view of the city can be had for free from Elephant Mountain or for NT200 from the Miramar Ferris Wheel in Neihu (Jiannan Road Station on the brown line - you'll see it), which could be worked in with a visit to Sophie's Garden. Alternatively good views of Taipei, from further afield, can be had from Maokong Gondola, which can also become quite crowded during dusk, especially on weekends.

Taipei 101 has its own MRT stop on the red (Tamsui) line, which as of February 2015 erroneously shows in Google Maps as Jieyuntaibei101 / Shimao Station (transliteration of Taipei 101 MRT station gone horribly wrong; other stations on this new line have the same issue). Alternatively, if coming from the blue line, it's a short walk from Taipei City Hall Station, what has attached a bus station with buses fanning out as far as Tainan.

Cost: NT500 (includes optional headset).
A combination pass for Taipei 101 and National Palace Museum is available for NT600 (saving NT150) but can only be purchased at Taipei 101.

Fortunately, a branch of Vege Creek has recently opened in the foodcourt of Taipei 101, making it the only vegan option besides snack food from Jasons Supermarket.
For Vege Creek: Start from the MRT (Taipei 101 / World Trade Center Station) Exit 4, and walk through the courtyard and into the food court. You should see a souvenir shop called Tea Struck, just beside the elevators. Walk between this shop and the elevators, and you should see a rack of vegetables on the wall. Grab a basket, and fill it up with fresh vegetables and other ingredients. Choose your noodle (select a card for the type of noodle) and take it to the counter to pay. They will give you an electronic buzzer, which will ring when your meal is ready, at which time go back and collect it.

This great Loving Hut is run by a friendly, talented and multilingual Korean lady and her family. It features a slightly wider and more unique menu than the nearby Jhuangjing branch, including a few Korean items, but is a little further to walk and a little more expensive, with dishes starting at around NT150. It's five hundred metres from Xiangshan Station or one kilometre from Taipei 101, both along well-paved roads (like most in this posh area of Taipei). 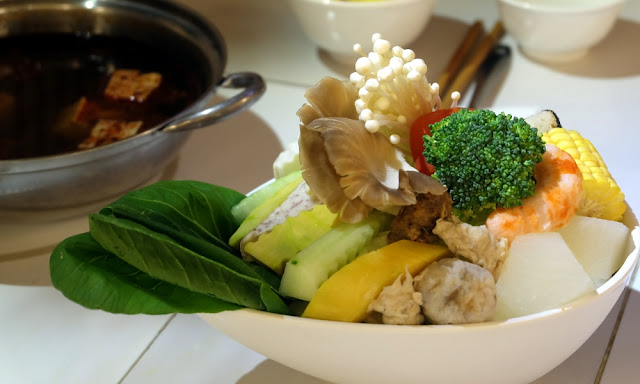 The Guangfu Loving hut is one of only two restaurants I consider 'must-visits' in Taipei. Its specialty is hotpots, a traditional North-East Asian meal in which diners cook their own raw food in a broth provided at the table. Traditionally hotpots are shared, with a family or group sharing a large pot and dipping their own chopsticks into the pot, but there are enough cookers available for everyone to have their own. Hotpots are traditionally very heavy on meat, and most broths contain animal products, and while there are a few vegetarian hot-pot restaurants around, this is almost certainly the only fully-vegan one in Taiwan. Their vegan versions of traditional broths, and their creative new variants, are amazing. This Loving Hut also serves a range of international and fusion cuisine (my favourite is the Tomyam Tahini Rice), especially during summer when hotpots become less popular, and desserts. At about NT200-300 per main dish this is more expensive than most Loving Huts, but excellent value. A feast for two, with (non-alcoholic) drinks and desserts, should come to around NT1000. Be sure to help yourself to the variety of condiments available by the back counter. The restaurant also sells a range of grocery items, but most are more suitable for a kitchen than a backpack.

The cookers work on induction, an efficient and responsive system which generates electrical currents inside the pots instead of just heating up. However it will also 'cook' anything metal placed near it, so never place electronic items or anything metal on or near the cookers (even when off, in case they are accidentally turned on). The menu is trilingual (including Japanese). This is a popular restaurant, so reservations are recommended, especially during weekends. There will probably be English-speaking staff (or ‘volunteer’ translators from a nearby table) when you call.
Posted by Jesse at 08:41