Vege Creek started out as a single restaurant close to Sun Yat Sen Memorial Hall, but they have expanded into Taiwan's second largest vegan restaurant chain after the Loving Huts. Unlike the Loving Huts, however, they are mostly focussed in Taipei. While their original branch offers the best dining experience, in 2018 they opened several new branches which are more convenient for travellers, including one in the Shin Kong Mitsukoshi Department Store opposite Taipei Main Station, and also one in the Taipei 101 foodcourt, making it the only decent vegan (or even vegetarian) dining option near this city icon.

Vege Creek combines modern minimalism in its simplicity with an enormous array of possible meals, with all ingredients hand-picked by the customer for a unique and delicious meal. It's run by two young men who saved money on working holidays in Australia, and returned to Taiwan to set up Vege Creek. It featured in the Taipei Times, Taiwan's leading English-language newspaper. 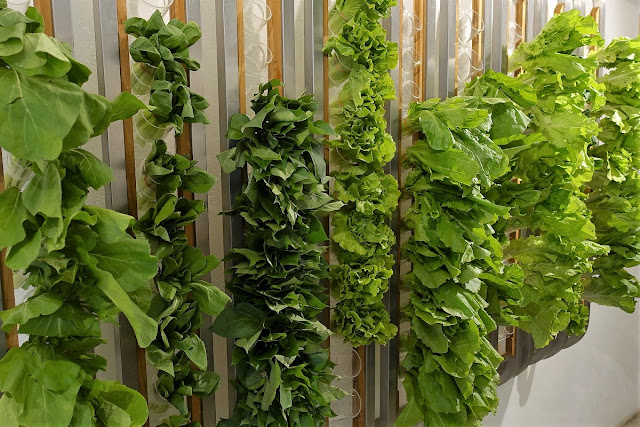 Customers first choose fresh vegetables off a wall, and then select additional ingredients, such as tofu, mushrooms etc, and place them in a basket. They then choose a card for a type of noodle, and take these to counter to pay. The chef then uses a small kitchen behind the counter and a lot of skill and flair to whip these up into a one-pot wonder in minutes.


In many ways, Vege Creek employs the cook-to-order section from the large all-you-can-eat buffets (such as my favourite Fruitful Food) and makes a restaurant out of it. It's one of these creations which seems so simple that it's hard to believe that (as far as I am aware) no one has done anything like it before.


The cards for the type of noodle will affect the meal significantly. All meals are cooked in a simple, healthy broth of in salt, pepper and traditional Chinese medicinal herb. Condiments are available, including a fiery chilli sauce, ginger, garlic and Toona, a Chinese herbal flavour similar to basil.

Price have increased somewhat over the years, or rather each bag contains fewer items than it did when the store opened, and a satisfying meal for a hungry foreigner now runs to NT$200-300.


The rest of these locations are inside shopping malls, so keep very reliable hours, mostly until around 21:00 or later. They are mostly open during national holidays when other restaurants close.

A new branch recently opened in the B1 foodcourt of the Shin Kong Mistukoshi Station (the tallest building around, just opposite Taipei Main Station). The find the foodcourt, walk out any South Exit of Taipei Main Station (ground floor), through the courtyard, cross the road and enter the tall building over the road. Take the escalators down to B1, and then Veggie Creek is at the north end of the foodcourt, close to the convenience store and the exit which leads back up to the road.

A new branch has recently opened in the foodcourt of Taipei 101. It's located near the famous Din Tai Fong, and Jason's supermarket. Start from the MRT (Taipei 101 / World Trade Center Station) Exit 4, and walk through the courtyard and into the food court. You should see a souvenir shop called Tea Struck, just beside the elevators. Walk between this shop and the elevators, and you should see a rack of vegetables on the wall. Grab a basket, and fill it up with fresh vegetables and other ingredients. Choose your noodle (select a card for the type of noodle) and take it to the counter to pay. They will give you an electronic buzzer, which will ring when your meal is ready, at which time go back and collect it.

The world's first 24-hour bookstore not only features a Veggie Creek, but also a branch of the Minder Vegetarian chain. This was their second branch, and is still one of the most popular. It's usually open until around 21:30. It used to be open the latest of all vegan restaurants in Taipei, but now Ooh Cha Cha's new bar, Hooch, is open until midnight. Take the stairs down to the Starbucks, keep going down until you reach the food court, and it's on the far side, diagonally across the food court.