The Penghu Archipelago, historically known by its Spanish name the Pescadores, consists of ninety islands, the main three of which are Magong, Baisha and Huxi (all named after their largest towns/cities) and are connected by bridges. Several other islands are reachable by short ferry rides. Penghu is sometimes known as Taiwan’s Hawaii, as it lies at a similar latitude and, unlike most of the Taiwanese mainland, it boasts white sand beaches with crystal clear water ideal for swimming. Penghu comes alive as a tourist destination during the summer months (especially July and August), and returns to its sleepy existence during the cold, windy winter. The most ideal time to visit, however, is a month or two either side of the summer period, when the weather is milder and the beaches are less crowded.

The architecture of Penghu has some noticeable differences with Taiwan proper, particularly the use of coral in stone walls and buildings, many of which lie abandoned around the islands as locals opt for more modern concrete housing, or migrate to Magong or Taiwan proper.  It also has some interesting geological features.

Kuibishan is an inter-tidal zone between the northeast tip of the main island (Magong) and a small volcanic hill. At low tide the sea parts to form what looks like a natural pathway between the two, invoking images of Moses parting the Red Sea, though the references to this Biblical story around the site and its small attached tourist centre are almost certainly lost on most domestic tourists. Visitors are allowed onto the natural pathway, but please wear sturdy footwear and be careful not to step on the delicate marine organisms which thrive in this inter-tidal zone.

Perhaps the most impressive sight in Penghu is the centuries-old Tongliang Banyang tree, whose branches and roots forms a natural canopy over the Bao’an Temple’s courtyard, providing shade from the harsh summer sun. It’s located just beside the north end of the Penghu Great Bridge, which connects Siyu Island, the western-most island of the main set accessible by road from Magong, and Baisha Island, which lies just to the north of Magong. At two and a half kilometres it is the longest bridge in Taiwan.

Just across Penghu Great Bridge is Er Kan, a traditional and previously mostly-abandoned village of coral stone houses which are being restored and preserved, where visitors can sample traditional (vegan) almond “tea”, which is similar to almond ‘milk’ in the West, but has a stronger almond flavour. Further south is the Yuwangdao Lighthouse, originally designed in 1874 by the British engineer David M Henderson (but since demolished and rebuilt). It was the first pre-fabricated, Western-style building in Taiwan. The area is still a guarded military complex, but visitors are allowed in to see the lighthouse, its small museum and stunning views of the sunset, however photographs of the area are not allowed for security reasons. This peninsula has been a strategic military point for centuries, and visitors can visit the impressive Xiyu Western Fort, which was built by the Qing Dynasty in 1887 after Penghu had been one of the main theatres of the Sino-French war. Also nearby is the peculiar Waian Fake Cannon, a concrete decoy cannon made by the Japanese government during World War II, in the hope that it would deceive American bombers to target this region instead of other  more important and better concealed military command posts.

But most visitors are attracted to Penghu not for its wartime past but for its beautiful and peaceful present, which can best be enjoyed at its beaches. Ji Bei islet is a short ferry ride from the North Sea, and is mostly visited for its beautiful white sandy beach. For around NT700 visitors can buy a package deal which includes the return ferry trip and unlimited access to the “watersports”, in which visitors are pulled at high speed on floating rafts in a variety of sitting, lying down or (for the brave) standing positions by jetskis. For an additional NT200 visitors can hire a scooter (electric or gasoline) to explore the island and travel the short distance between the ferry terminal and the beach.

For those after a quieter time, there are several beaches which (at least outside the summer months) are almost deserted, especially during the evening. Please be careful, however, as most beaches don’t have lifeguards, and currents, rocks and sudden drops make these beaches only suitable for capable and experienced surfers and swimmers.

What makes Penghu so attractive a destination to vegans is that it boasts its own vegan bed&breakfast, Loving Hut Paradise Island, located just a few minutes’ drive outside of Magong City. and features beautifully-decorated rooms (with attached bathrooms) inside a large home.


The English-speaking host, Hwei, cooks a traditional breakfast in the morning, offering a chance to try vegan versions of traditional Penghu favourites. Starting at around NT1800, including airport pickup, this is an excellent deal for accommodation, breakfast and this level of service in such a tourist-oriented city. I particularly appreciated how helpful she was with advice on what to see and where to eat in Penghu, especially since there are only two fully-vegan restaurants in the city. The hosts also offer dinner and take-out meals for picnics, which are perfect for days at the beach and especially outlying islands (such as Jibei) which don't have any vegetarian restaurants.

As many visitors from overseas find this blog, I must make a note about spirituality. The hosts Hwei, and her husband Andy, are devout followers of Supreme Master Ching Hai, the Vietnamese-born spiritual teacher and humanitarian who has inspired hundreds of thousands of followers in Taiwan and abroad to become vegan, most famous as the founder of the Loving Huts, the world's largest vegan restaurant chain. Her photos and artwork adorn every wall (guest rooms contain artwork, but not portraits). I occasionally receive complaints from non-religious or Judeo-Christian readers of my blog about my recommending restaurants run by her followers, especially Loving Huts and others which play Supreme Master Television, however this is becoming much less common now as the master and her followers become better understood in vegan circles around the world. As at any B&B, guests at Paradise Island stay in the owners' own home (a very beautiful one) so their spiritual practice is more obvious than at hostels or hotels. If you are not comfortable staying in such an environment then I recommend staying elsewhere; however please bear in mind though that another hotel or B&B on Penghu may well be run by followers of Taoism, with an altar for the offering of meat to deities.

Penghu is no vegan haven, but there are two totally vegan restaurants on the archipelago, and a few more vegetarian ones. These are all located in the city of Magong, so outside the city it's necessary to bring food or get by on convenience store food. 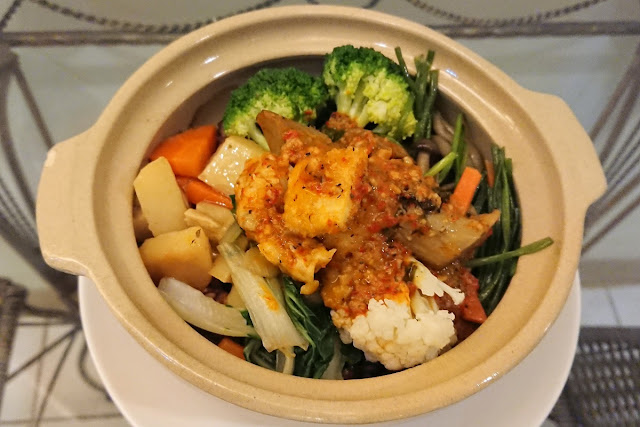 As with all Loving Huts, we can be 100% confident here that all the food is vegan and made without unhealthy additives. This branch serves a fairly typical mix of Taiwanese food, but with Penghu being a destination famous for fish, it also serves fake sashimi, made from fresh vegetables instead of the more-common and often dubious fake fish found in many restaurants in Taiwan. These probably won't be your most memorable meals in Taiwan, but like all Loving Huts it has friendly, welcoming staff who cook the best vegan food possible for the location and budget. Basic meals start at around NT100, and NT300 will return a very satisfying meal and drink after a long day at the beach. It also sells a few packaged snack goods which are perfect for beach picnics or ferry trips.


This vegetarian buffet has a vegan chef, and is understood to be completely vegan. Of course we can't be as confident as we can with the Loving Hut, but this is a good second option in Magong, especially since it opens earlier. It serves both a la carte dishes and a buffet. I recommend ordering off the menu (if you can read the Chinese) and getting a take-out meal for the beach or any trip off the main island chain. There are two types of cardboard meal boxes to choose from, but the ones with different compartments help to preserve the food for longer. Please remember, however, to separate deep fried foods from steamed vegetables and tofu, or don't get fried foods at all if you'll keeping them longer than an hour or so.

Penghu is certainly a beautiful escape from Taiwan proper, but (for better or for worse) its tourist infrastructure is only just beginning to catch onto the market for foreign visitors, so this is where having a vegan, English-speaking host is so invaluable. The best way to get around the archipelago is by renting a scooter, which usually requires a local or international scooter license, however foreigners without licenses can (legally) rent smaller, slower, less-powerful electric scooters, just as low-powered scooters and electric bicycles don't need licenses in many parts of the world. There are limited local buses, but a one-day tour bus takes visitors to many of the key destinations to the north of Penghu. Taxis are available, but usually need to be called, and always check the price first, as most don’t use meters. For longer times it's possible to hire taxis for around NT$500 per hour. While all young people learn or have learned English at school or university, naturally English is spoken much less in these more-isolated cities than it is on the Taiwanese mainland, however from my experience people are even friendlier and more accommodating to foreign visitors.


All considered, I recommend a visit to all residents of Taiwan, especially if you have a local drivers’ license and can speak some Chinese. For foreign visitors during the warmer months (from around April to October) who are experienced travellers keen on an adventure, I recommend Penghu to anyone spending longer than two weeks in the country. This was my first visit, and I intend to visit a few times more and add Penghu to my main guidebook to Taiwan in a future edition.