Taipei has one specialist raw, vegan restaurant and a few vegan restaurants which offer some good raw dishes. While their menus are much simpler and more limited than those offered in New York or San Fran Cisco, by international standards raw food in Taiwan is excellent value.


Plants is Taiwan's only completely-vegan, specialist raw food restaurant. Vegan owned and operated, it serves a delicious range of raw cakes, for which it is most famous, and a few light mains. They also serve vegan wines.

As raw food is made from expensive ingredients (such as cashew nuts) and is time consuming to produce, it will always be more expensive than mass-produced cooked food, but prices are certainly fair here for such quality food. Expect to pay around NT200 for a smoothie or fancy coffee, and NT300-400 for a small main dish. Most people visit for a snack between meals, but it's also good for a light meal if your other main meal of the day will be large, perhaps at Taipei's most vegan-friendly upscale buffet, or a hearty hotpot at the Guangfu Loving Hut.

Plants is conveniently located in the vegan hub of Taipei, like most other top vegan restaurants. They take reservations through their website. I recommend making a point of visiting Plants during a short trip to Taiwan, and many resident vegans go regularly.


One of Taipei's longest-running vegan restaurants, Ooh Cha Cha has long been famous for its colourful and healthy salads and vegan raw cakes. While most of its menu is cooked food, it's still among the healthiest food Taipei has to offer; its earliest niche was providing healthy, MSG-free food at a time that there was little else available besides oily buffet food. While its menu now includes burgers and other Western staples, I still like its simple, original sandwiches, especially for their delicious, hand-made sauces. It's conveniently located near Dictator (Chiang Kai Shek) Memorial Hall, and a few stops from Taipei Main Station. For travellers it's a great stop for a healthy meal or a taste from home, and as a resident it's one of my most visited Taipei restaurants, but if you will have only a few meals in Taipei I would recommend trying more Taiwanese food (such as the Guangfu Loving Hut). 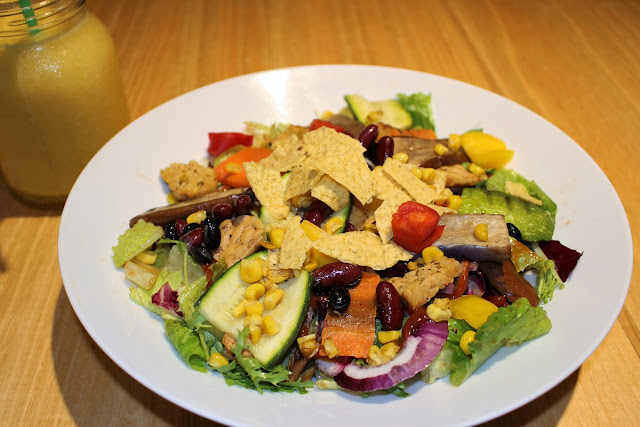 In September 2017 Mani Mani has just opened in Taipei, making it the newest edition in the cluster of vegan restaurants around Zhongxiao Dunhua Station. They offer and a top-noch dining experience, so if you would like to impress a Taiwanese person then this could be the place. They also offer what are probably Taipei's most beautifully-presented salads (and the most expensive, at around NT400) however beneath the top layer mine was mostly insipid lettuce, whereas a less-expensive salad from Ooh Cha Cha (see above) is a much more complete meal.

Unfortunately  Taipei has two raw businesses which pretend to be vegan and have intentionally misled vegan customers into consuming non-vegan products. Both do a great job at promoting plant-based food to non-vegetarian custumers, so I hope they are both successful, however I feel a need to warn vegan customers that these places cannot be trusted to provided vegan food. Fortunately Plants is conveniently located and reachable from all over Taipei, so there is no need to risk Naked Food or Universe Cafe.

2018 Update:
Nakedfood have closed their restaurant, but still do catering and other food industry services. This is unfortunate since they did a great job promoting plant-based food to non-vegans, but not altogether surprising since they lied to and alienated the vegan community.

NakedFood are a famous raw restaurant in Taipei which claim to be all vegan, however its non-vegan owners have for years been lying to customers about their wines. First they they told all their customers the wine was vegan and when confronted about it just said they didn't know wine wasn't vegan (several times, over several months). Then when finally caught out on their own Facebook page they "redefined veganism" to include their non-vegan wines, and demanded that the vegan community "accept their definition". They now claim (again) that all their wines are vegan, however I checked with the company of their most recent wine (Audacia from South Africa) which they specifically promote as vegan on their Facebook page and the owners of the company quickly replied and told me that they don't produce any vegan wines.

Unfortunately, my Happycow review warning people of this deception was removed after Nakedfood threatened legal action against Happycow, as Happycow doesn't have the resources to fight such a battle, especially in another country.


2018 Update:Like Nakedfood, Universe have also closed their store, but I will leave this here in case they re-open elsewhere.

Much like Nakedfood, I was delighted when they opened, and after trusting they were vegan began recommending them, as both serve good food. Universe Cafe serves cakes, smoothies, juices and other drinks right beside Taipei City Hall Station, a short walk from Taipei 101. Unfortunately in 2017 they began using Yak butter in their drinks while still promoting themselves as vegan (and promoting veganism). They considered this okay because they know the source of the yak butter, and are confident that no harm takes place to the yaks. True or not, this was deceptive to their loyal vegan supporters, and with this clear lack of understanding of veganism (and/or lack of honesty) I don't recommend them to vegans. Go to Plants instead.