All you Can Eat Vegetarian Buffets in Taipei 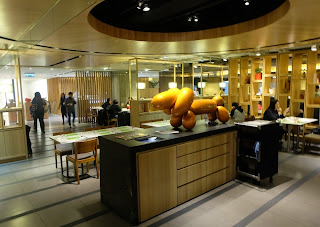 Taiwan is famous for its luxury 'all-you-can-eat' buffets, and this page is my second most viewed (after iVegan supermarket and About Animals). However, over the last few years I've gone from recommending Evergreen as a must-visit restaurant in Taipei, to simply suggesting that it's the best option if you really must visit such a restaurant, but not really recommending any of them. This has changed when someone kindly added Fruitful Food (Chinese Website) to Happycow. Besides having better food and consistent vegan labelling, it's also much more convenient, being the only such buffet in Taipei to be close to an MRT stop.

While buffets like Evergreen (previously best), Spring and Jen Dow (don't bother) serve food made with fresh ingredients, and especially good salads, it's still mostly been heavily fried food. Fruitful Food still serves many of the traditional fried foods, but compared to the others it's just much lighter and healthier, and even their fried feels less greasy. Like all buffets it has an amazing fruit and salad bar.

Fruitful Food is the only large buffet I know of which consistently labels everything as being vegan (which most of it is) or containing dairy or egg (or alcohol). Labels are in Chinese, but are colour-coded, and while it's not difficult to recognise the Chinese characters staff would be very willing to help.

I'm always mistrustful of fake meat, which was all labelled vegan. It may well be vegan, but given all the uncertainty and the fact that most fake meat in Taiwan is considered vegan when it isn't, I'd still recommend avoiding it. But that still leaves plenty of vegan options.

While it was disappointing to see Evergreen give up on their vegan desserts, Fruitful Food have plenty of vegan desserts, carrying such labels as "vegan chocolate cake". They also have an ice cream machine which serves one vegan sorbet, and plenty of fresh fruit. 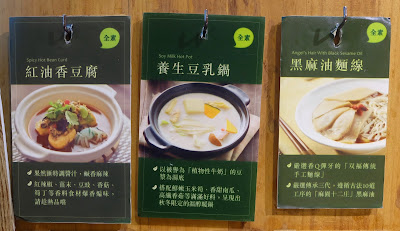 Like most buffets of this type, it's possible to order meals, including hot pot, "angel's hair" (made of mushrooms) and spicy tofu. They will be delivered to your table.

Essentials
台北市忠孝東路四段200號12F(明曜百貨)
12th Floor, Mingyue Department Store, Number 200, Zhongxiao East Road.
02-27718832
Zhongxiao Dunhua Station, Exit 3, walk out and around to the right, and take an elevator from the street.

Prices are rounded to the nearest hundred NT (prices shown on their website don't include "service charge" - something I hate as its only purpose is to deceive customers into thinking they're spending less). This is excellent value for such fine food. If you make it your main meal and coffee of the day it may not cost much more than a meal and coffee elsewhere.

This restaurant is VERY popular. Don't even think about turning up without a reservation during the weekend. I recommend visiting for a weekday lunch. It's important to leave by 15:00 so that the staff can prepare for the next sitting.
Posted by Jesse at 20:21